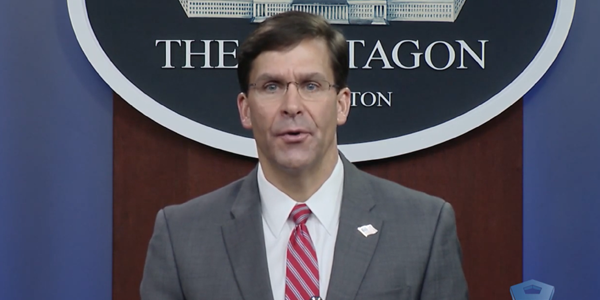 The Department of Defense is “not immune to the forces of bias and prejudice – whether visible or invisible, conscious or unconscious,” Defense Secretary Mark Esper told service members in a video address released Thursday, saying that leaders across DOD and the services are ready to act.

“It is time to lead not just because it’s consistent with our values and our legacy, and it’s the right thing to do, but also because this is how we will become even greater than we are today,” Esper said.

Esper outlined actions the department is taking, such as establishment of the Defense Board on Diversity and Inclusion in the Military, “which will conduct a six-month sprint to develop concrete, actionable recommendations to increase racial diversity and ensure equal opportunity across all ranks, and especially in the officer corps.”

DOD will also stand up an advisory committee on diversity and inclusion in the military, similar to an existing advisory board on women in the military. In the meantime, Esper set a two-week deadline for civilian and uniformed leadership to bring him ideas that can be implemented immediately

“I invite all of you to share with me your good ideas. I want to hear from you,” he told service members in the video. “I don’t want anyone to think you do not have a role, or cannot play a part, in this conversation – one that is so critical to our esprit, our camaraderie, and our readiness. These are not problems that can be identified and solved from the Pentagon alone. We need your help.”