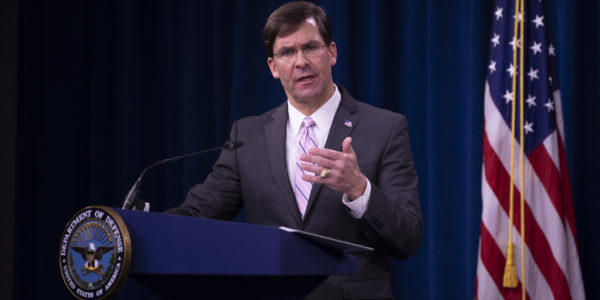 In response to President Donald Trump’s call to invoke the Insurrection Act, an 1807 law allowing the president to deploy active-duty troops for law enforcement, Defense Secretary Mark Esper came out in opposition to the commander in chief.

“The option to use active-duty forces in a law enforcement role should only be used as a matter of last resort and only in the most urgent and dire situations,” said Esper in a press conference on Wednesday. “We are not in one of those situations now. I do not support invoking the Insurrection Act.”

Anti-police brutality protests have spread across the country in response to the recent killing of Minneapolis resident George Floyd.

Despite the Defense Secretary’s remarks, Esper decided to overturn a Pentagon’s decision to pull back nearly 200 soldiers with the 82nd Airborne’s after deployment to the nation’s capital to respond to protests.

Federal News Network reports that nearly 1,300 troops have been sent to D.C.

“It’s a dynamic situation,” said Army Secretary Ryan McCarthy. “We’re trying to withdraw them and get them back home.”