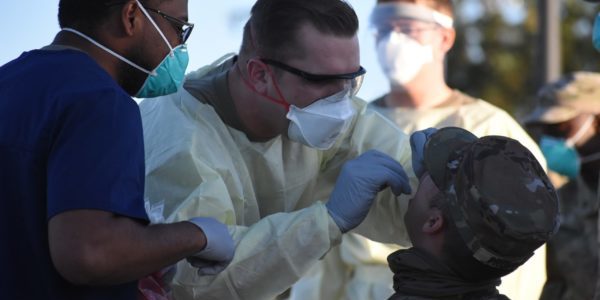 Confirmed cases of COVID-19 among service members almost doubled in June, according to DOD data.

DOD reported 6,396 cases in service members on June 1, which grew to 12,521 by July 1, Military.com reported. Combined with cases among civilian personnel, dependents and contractors, the total number of confirmed cases within DOD is 18,071, as of July 1.

“Not surprisingly, we’re seeing some uptick in our cases in terms of infection largely around where we’re seeing it in the civilian community, so in Florida, Texas, Arizona, some parts of California,” Thomas McCaffery, assistant secretary of defense for health affairs, told reporters at the Pentagon Wednesday. “That wouldn’t be a surprise; we’re part of the community.”

The Pentagon does not release case load data for individual installations.

McCafferty said the military has been testing more symptomatic and asymptomatic people, which is one reason for the uptick in confirmed cases, and that DOD is isolating patients and tracing their contacts after each positive test, Military Times reported.

“We would be concerned with any identification of new infections, but we are taking the same measures that the public health community writ large would take,” he said.