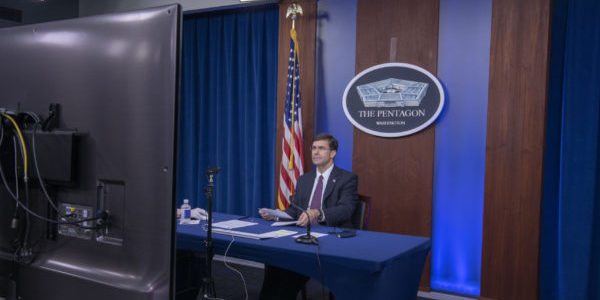 The May killing of George Floyd in Minneapolis was a “wake-up call” for Pentagon leaders to examine and address race issues within the military services, Defense Sec. Mark Esper said Wednesday.

“I don’t think what everybody appreciated — at least me, personally — is the depth of sentiment out there among our service members of color, particularly Black Americans, about how much the killing of George Floyd — and the other incidents that preceded it and succeeded it — had on them and what they were experiencing in the ranks as well,” Esper said at an Aspen Security Forum virtual event, according to Military Times.

“DoD had a history of leading on these issues, and it was time to step up again, to really capture this moment,” he said.

Esper convened a team to look at ideas on how to ease racial tensions among service members. In an initial report last month, the task force suggested reviewing of the Equal Opportunity program, removing photos from promotion packets and considering whether grooming standards may be biased. A more thorough review is still ongoing.

Esper banned the Confederate flag from all military installations last month, and Joint Chiefs Chairman Army Gen. Mark Milley has expressed support for the calls of some to rename 10 Army bases named after Confederate generals.