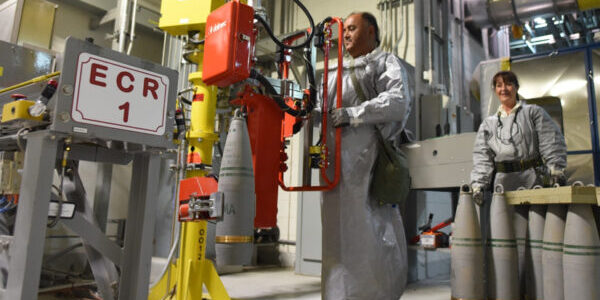 The Army has spent over $3 billion over the last decade to bring its facilities to modern standards, Federal News Network reports. Officials stated recently that the service will seek to transform its supply chain in order to become more resilient in the future, as well as better protect its workforce.

“A building was designed to support a process for artillery shells, and it wasn’t designed with anything else in mind,” Brig. Gen. Vincent Malone, the joint program executive officer for armaments and ammunition told reporters at the AUSA conference on Tuesday. “Going forward, we have to design for flexible execution and that’s more feasible today because our machinery, by and large, is being designed for flexible execution.”

In particular Malone cited facility redesign which would be to keep employees physically separated from the most dangerous aspects of building munitions. Furthermore he said that many crucial components of the munitions supply chain (i.e. dinitroanisole (DNAN)) are procured from overseas vendors. While it would be preferable to build DNAN factories within the U.S., the initial cost of doing so will not come cheap.

“We need to get the people away from the energetics, and to that effect, we need to begin implementing technology and the architectures that allow us to implement a modular technology, an evolvable technology,” he said. “That’s transformational. You can’t do that with the current design for the facilities – it’s not just an upgrade to the current facilities. That’s one reason why we we’ve begun this effort to get the Office of the Secretary of Defense and Congress in line with us, to help us make sure that there are no roadblocks to moving down that path.”