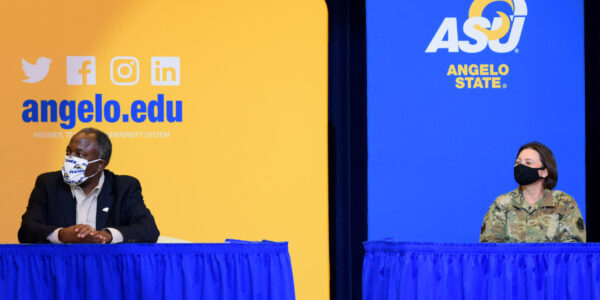 Goodfellow AFB partnered with Angelo State University (ASU) to providing immediate, quality housing for incoming Airmen while also addressing dorm vacancy at ASU brought about by the pandemic. Under the agreement, ASU is leasing 55 rooms in a residence hall to Goodfellow AFB to house up to 110 military students. The IGSA helps provide an immediate short-term dormitory need until a new permanent 400-bed residence hall is built.

For the past four years, Lowndes County has been operating Moody AFB’s Water and Wastewater Treatment Plants under an IGSA. With this agreement, Moody AFB became the first base in the Department of Defense to gain approval for an IGSA with a municipality for operation of a utility. The parties added various modifications to the IGSA during this period in full agreement with both parties. With one more year left on the original 5-year agreement, the agreement to-date has generated an estimated $1M over 5 years in savings for Moody and provided additional revenue for Lowndes County.

Joint Base San Antonio (JBSA) is using a Blanket IGSA for installation support services with the Alamo Area Council of Governments (AACOG) that allows for an expedited award process for items, such as bulk purchases, vertical transportation equipment maintenance, fire suppression maintenance, and ambulance services. The signing ceremony for the Blanket IGSA was held on 25 Sep 2019 and the first task order for demolition services was signed on 18 Sep 2020. This project included purchasing homes within JBSARandolph’s airfield Clear Zones, safely demolishing those homes through the contract, and creating open green spaces to increase flight and community safety. JBSA is actively working the details of the next task order via the Blanket IGSA.