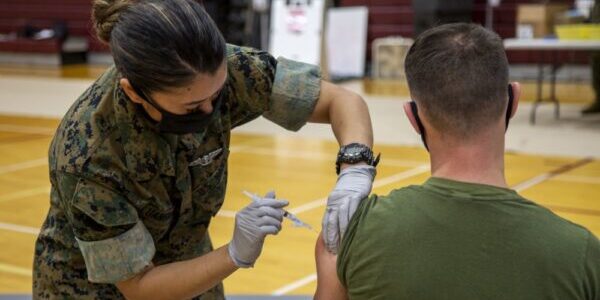 Approximately one out of three service members have opted out of taking a COVID-19 vaccination, a rate that is consistent with the nation’s attitude towards accepting vaccinations, CQ reports.

According to Department of Defense officials, the Pentagon has administered 916,000 doses to service members, civilians and contractors. This figure represents almost 20 percent of the department workforce.

During a House Armed Services Committee hearing on the topic, Brig. Gen. Paul Friedrichs, staff surgeon for the Joint Chief said that there “are no circumstances where the Department of Defense has the legislative authority” to mandate that its employees take the vaccine, adding such action would require intervention “outside of the Department of Defense.”

To date, 359,000 active-duty troops have received at least an initial dose, and 147,000 service members who have received both doses.

A December poll by the Centers for Disease Control and Prevention revealed that 32.1 percent of Americans would refuse the COVID-19 vaccine.