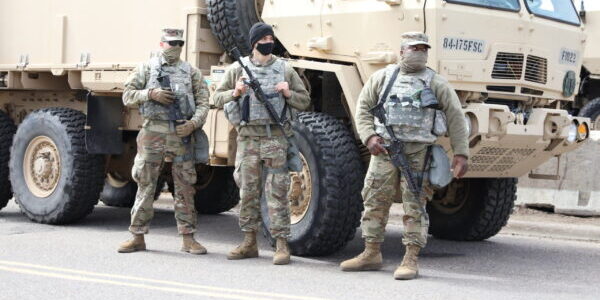 National Guard members are on patrol outside the Minneapolis court house where a jury is now deciding whether to convict former Minneapolis police officer Derek Chauvin for the killing of George Floyd in May. Jury deliberations started late Monday.

Other communities and states are also on edge for public reaction to whatever the jury decides.

The Army has approved a request from Washington, D.C. Mayor Muriel Bowser (D) to activate additional Guard members if needed, CNN confirmed. Guard troops have been on the ground in D.C. since the Jan. 6 Capitol riots.

Illinois Gov. J.B. Pritzker (D) has approved a request from Chicago Mayor Lori Lightfoot (D) to activate the Guard in a city that has already been experiencing protests and vigils after the city last week released video of a Black 13-year-old boy being shot dead by police, as ABC 7 Chicago reported.

The White House said the federal government is communicating with local authorities across the country in case a response is needed.

“We’re in touch with states, with governors, with mayors,” White House Press Secretary Jen Psaki told reporters Monday. “And certainly we will continue to encourage peaceful protests, but we’re not going to get ahead of the verdict in the trial.”