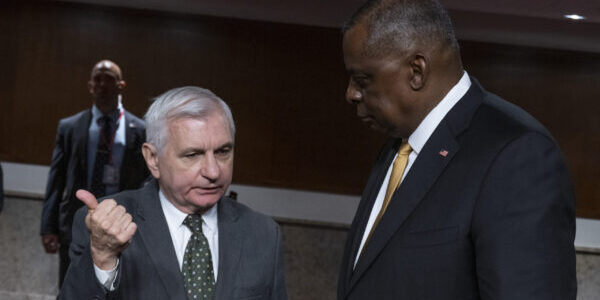 Joint Chiefs Chair Gen. Mark Milley agreed with lawmakers Thursday that the Pentagon is taking risk by cutting some legacy weapons systems to instead focus on forward-looking technologies.

“It has to do with relevance and pivoting to the future,” Milley told the Senate Armed Services Committee. “This budget biases the future operating environment, the change in the character of war and against the pacing threat of China.”

Milley was testifying alongside Defense Secretary Lloyd Austin and DOD budget chief Mike McCord. It was the latest in a series of hearings where members in both parties and on both sides of the Capitol have pressed about systems divestments in the $715 billion defense budget request, a blueprint that committee chair Jack Reed (D-R.I.) called “a starting point for Congress.”

Austin pointed to the personnel investments in the budget request.

“Our budget request increases funding to support in-home care and support, which has become increasingly important during the pandemic,” Austin said in prepared opening remarks. “We will also be seeking funds to improve military base pay, retention bonuses, and other incentives that will help us attract and retain the best talent. And we will be working hard to combat challenges that make service in the ranks more difficult for all the men and women of the Department, from getting a better handle on the extent to which we experience extremist behavior, to combating sexual assault and harassment.”

Austin said it is clear the military justice system needs to change to stop sexual assault, leaving open the possibility of moving those complaints outside the chain of command, but he stopped short of endorsing Sen. Kirsten Gillibrand’s (D-N.Y.) broader military justice reform bill, which has enough support to stop a filibuster.

“What we are doing is not working, and we need to fix it,” Austin said.