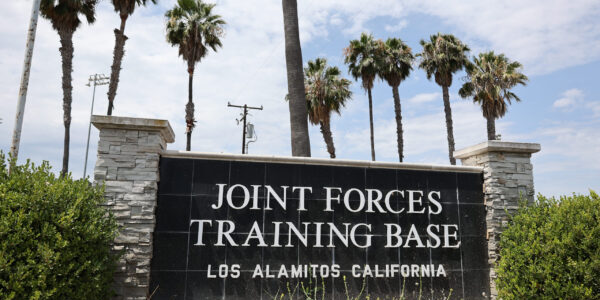 Virginia Governor Ralph Northam (D) said Fort Pickett, Virginia is now a processing site for evacuees coming in from Afghanistan. “It starts with them landing [at Dulles International Airport], being processed, tested for COVID, offered vaccinations, and then… being moved to either Fort Lee or Fort Pickett,” Northam said, according to WRIC TV. “Plans are then made for further disposition whether they go to other states or stay here in Virginia; about 10% are staying here in Virginia.”…

The California National Guard is considering adding 99 acres of solar panels at Joint Forces Training Base Los Alamitos to reduce the installation’s carbon footprint, support the regional power grid and increase emergency response capability, the Los Angeles Times reported. “[It] will also increase power reliability during normal operations by alleviating transmission line congestion, which makes this a win for the installation, the Army and the larger community,” according to Robert Hughes, acting executive director for the Army Office of Energy Initiatives….

Fort Bragg, North Carolina leaders plan a series of town halls to get community input on the installation’s potential name change. It is one of several installations named for a Confederate general, but the name also “represents an emotional connection for people, so we take that very seriously,” Garrison Commander Col. Scott Pence said, according to The Fayetteville Observer. Pence noted that other installations with airborne units often use the phrase “back at Bragg” as a nod to its association with mission readiness.