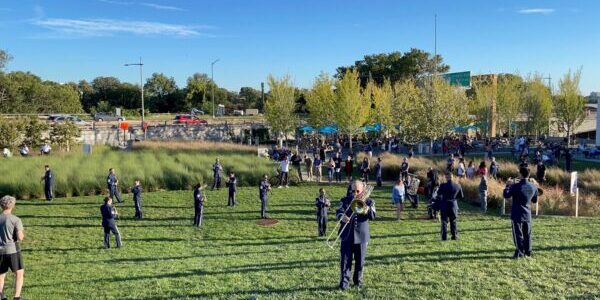 New York Gov. Kathy Hochul (D) signed an executive order that would allow her to deploy medically trained National Guard members to take the place of any health care workers terminated for refusing to get vaccinated. “We’re taking all the steps preemptively in anticipation of what I call a preventable staffing shortage,” Hochul said Monday, which was the state’s deadline for health care workers to get at least their first dose of the COVID-19 shot, amNY reported….

The state of Hawaii has extended an agreement to continue allowing general aviation – including tourist activities such as skydiving – at Dillingham Airfield. The activity was supposed to stop at the end of this year, but the state’s transportation department extended it until summer 2024, citing progress in long-term joint use planning talks with the Army, the Honolulu Star Advertiser reported….

The Air Force Band and the John F. Kennedy Center for the Performing Arts once again presented John Luther Adams’ “Sila: The Breath of the World” at the Kennedy Center’s outdoor REACH campus over the weekend. Attendees were able to walk among the musicians to experience the performance. It was co-commissioned by Washington Performing Arts.