With Afghanistan Over, Biden Signals Refocus to Rising Threats 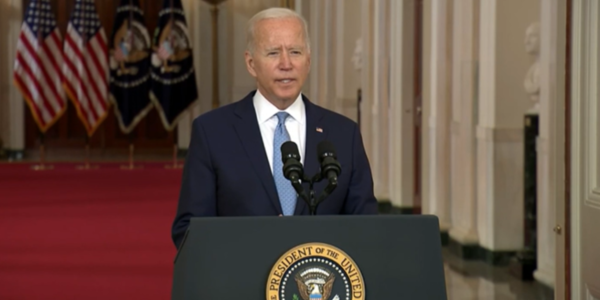 President Joe Biden defiantly defended his withdrawal from Afghanistan in remarks Tuesday from the White House.

“The fundamental obligation of a President, in my opinion, is to defend and protect America — not against threats of 2001, but against the threats of 2021 and tomorrow.”

He said the pullout will let the military focus on emerging foes such as Russia, China and Iran. And he again said that DOD leaders were all on board with the timing.

“The decision to end the military airlift operations at Kabul airport was based on the unanimous recommendation of my civilian and military advisors — the Secretary of State, the Secretary of Defense, the Chairman of the Joint Chiefs of Staff and all the service chiefs, and the commanders in the field.”