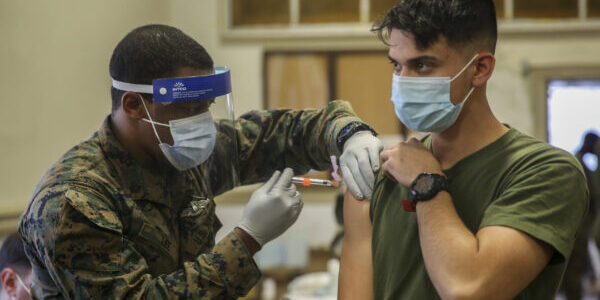 The senior Republican on the Senate Armed Services Committee has called for the Defense Department to drop its requirement that service members get vaccinated.

“This haphazardly implemented and politically motivated vaccine mandate must be immediately suspended or risk irrevocable damage to our national security reminiscent of sequestration,” Sen. James Inhofe (R-Okla.) wrote in a letter to Defense Secretary Lloyd Austin, which was released Tuesday. “Plainly stated, no service member, Department of Defense civilian or contractor supporting the Department should be dismissed due to failure to comply with the mandate until the ramifications of mass dismissal are known.”

Inhofe’s remarks could stir up a partisan COVID-19 debate as the full Senate plans to consider its version of the National Defense Authorization Act in the coming weeks.

“There are already 17 vaccines that are mandatory for all servicemembers,” Sen. Kirsten Gillibrand (D-N.Y.), chair of the Armed Services Personnel Subcommittee, told CQ. “This is a military readiness issue — the COVID vaccine will keep our troops healthier, safer and ready to fight when called upon.”

The House-passed NDAA does not directly address the vaccines but declares that service members cannot receive a dishonorable discharge over refusal to get the shots.

White House Press Secretary Jen Psaki said during a press briefing Tuesday that about 90% of service members are vaccinated.

A group of 16 unidentified service members filed suit against DOD Tuesday to try to stop the vaccine mandate, as Military.com reported.