Report: Extremism Up Sharply in Recent Years among Troops, Veterans 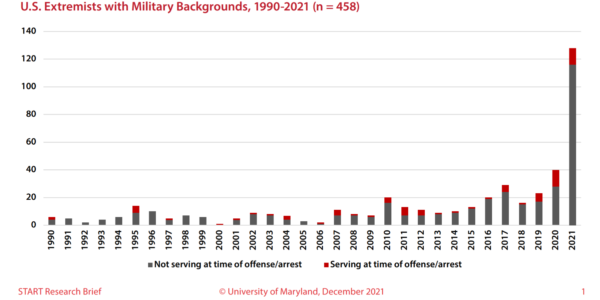 More than 450 individuals with backgrounds in the U.S. military have been charged with or convicted of criminal acts “motivated by their political, economic, social or religious goals,” according to a new study from the University of Maryland’s National Consortium for the Study of Terrorism and Responses to Terrorism. About one-fourth of those are connected to Jan. 6 insurrection charges, the “Extremism in the Ranks and After“ report said.

The study is based on data from the Profiles of Individual Radicalization in the United States (PIRUS) report that tracks Americans who were radicalized in the U.S.; held views that justify illegal actions to achieve political, economic, religious or social goals; and committed a criminal offense clearly motivated by ideology, resulting in their arrest, indictment or death.

The biggest spikes from the past 30 years happened in recent years.

“These include the Unite the Right rally in Charlottesville in 2017; the COVID-19 pandemic, racial justice protests and U.S. Presidential election in 2020; and the Capitol breach of January 6, 2021,” the authors wrote.