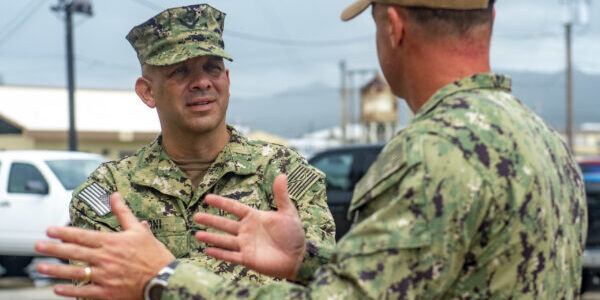 Rear Admiral John Menoni admits he was in “a little bit of shock” in March 2020 when he first heard that sailors from the USS Theodore Roosevelt would be headed to Guam after testing positive for COVID-19, but then he “really just kind of immediately got after the problem” by reaching out to Guam Gov. Lou Leon Guerrero to keep her apprised of the situation.

After dozens of sailors tested positive and were sent to Guam for treatment, the Roosevelt was ordered to dock at the island. Menoni, then commander of Joint Region Marianas Guam, worked closely with Guerrero and other local leaders on how to treat COVID-19 patients, develop quarantine plans, support the aircraft carrier’s mission and protect the people of Guam. At one point, about 1,000 uniformed, civilian and local personnel were working together to help the Roosevelt’s 4,800 sailors.

“I cannot tell you how humbled I was by the support of the people of Guam, the government of Guam and the military community,” Menoni says.

It was Menoni’s fourth tour on Guam, but he had only been in the current role for six months. Fortunately, after taking command, he had wasted no time developing relationships with Guerrero and others to ensure ongoing cooperation between the military and community leaders, which turned out to be critical when the crisis arose.

“You can’t surge trust. You can’t build trust overnight,” he says. “It takes a while.”

Menoni is being recognized as an ADC Defense Community Champion, an honor for which he was nominated by Guerrero.

Menoni and his family are now in Virginia, where he is commander of the Expeditionary Strike Group Two, headquartered in Virginia Beach, but he says he will always feel a connection to the island.

“My first home is wherever my wife and children are, and Guam is my second home,” he says.