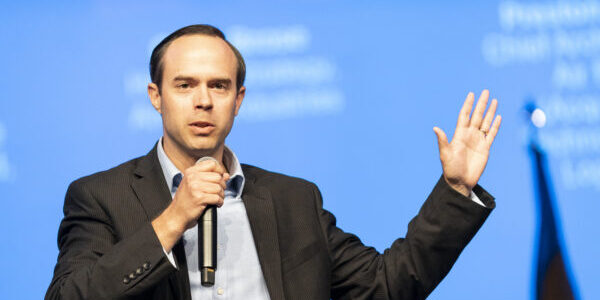 A leader of the Pentagon’s technological innovation initiatives resigned Monday, saying that DOD is moving too slowly to keep up with the private sector.

“We’re falling behind the commercial base in key areas, so we’ve got to catch up,” Preston Dunlap told Bloomberg News after resigning his role as chief architect officer. He served three years in the Space Force and Air Force.

“By the time the government manages to produce something, it’s too often obsolete,” Dunlap wrote in his resignation, which he later posted on LinkedIn. “Much more must be done if DOD is going to regrow its thinning technological edge.”

Dunlap, who is starting his own space software company, said DOD’s innovation model should look more like that of SpaceX, the Elon Musk-led company that has shaken up space launches.

Former Pentagon official Michele Flournoy told Bloomberg that Dunlap’s departure was “a loss.” She said he had helped bring in more than 100 new commercial contractors at the Air Force and that the Pentagon should “figure out how to bring these new technologies in rapidly and at scale if we’re going to successfully deter aggression by China in the future and/or defeat it if it happens.”