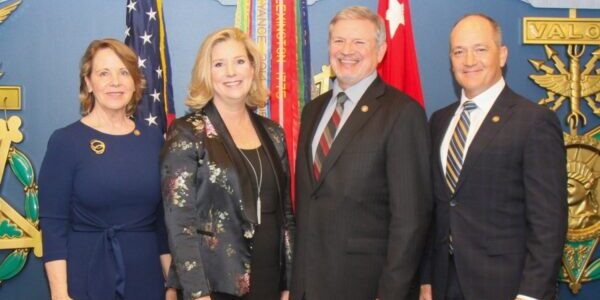 Army Secretary Christine Wormuth swore in three new Civilian Aides to the Secretary of the Army last week, according to a press release.

“They served with distinction in uniform, and now as CASAs, they will be great advocates for the Army in their local communities,” Wormuth said.

Carol Eggert, the new CASA for central Pennsylvania, served for more than 30 years and retired as brigadier general. She is the senior vice president of military and veteran affairs at Comcast NBCUniversal.

“My life’s work has involved connecting the American people to the military that secures our national security and democratic way of life,” Eggert said. “This role creates more opportunities to build the awareness and understanding that contributes to a strong all-volunteer force.”

Daryl Keithley retired as a command sergeant major. Now he is a recruiter with the Las Vegas Metropolitan Police Department.

“I have a strong passion for taking care of soldiers and helping them become integrated into the Army that I have been affiliated with for 34 years,” Keithley said. “It is an extreme honor to continue to serve the United States Army and the nation in this capacity.”

Michael Kopp, a veteran of the Army and the South Dakota National Guard, is now president and CEO of Colorado Concern, an alliance of business executives.

“To be honored with this opportunity to serve as a CASA is a remarkable privilege,” Kopp said. “The Army gave me a world-class example of the attributes of leadership, patriotism, sacrifice, duty, grit, determination and teamwork.”

Each state, the District of Columbia and the five U.S. territories have one or more CASAs.