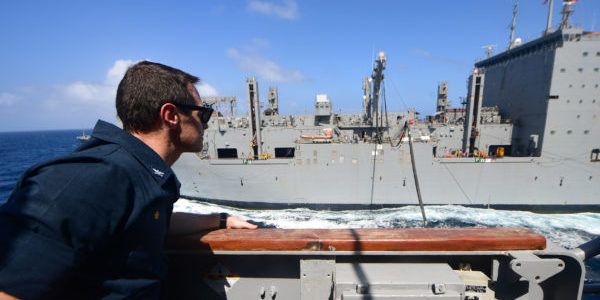 Two Navy ships have set a new record for time at sea, after receiving orders not to stop at foreign ports to avoid coronavirus exposure, AP reported.

The USS Dwight D. Eisenhower and USS San Jacinto both left Norfolk, Virginia, in January in the early days of what would become a pandemic. They have each been at sea for 161 days, beating the previous record of 160 days.

Port stops allow for ship maintenance, and crew members have had to improvise, like they did when the San Jacinto’s helicopter bay door broke and they didn’t have a sprocket they needed to fix it.

“My guys did the research, and they said, ‘Hey, these 90-pound dumbbells are made from the same material that we need for this gear,’” Capt. Edward Crossman, the ship’s commander, said. “If they were magicians, they’d have 100 rabbits running around the house, because they keep pulling them out of their hats.”

Crew members who are missing the scheduled port calls have found new ways to entertain themselves, including a March Madness tournament on the San Jacinto to see who could grow the ugliest mustache.

Neither ship is expected back in Virginia until later this year.

“I’ve had a couple requests to see if we could stay out longer to make sure we beat the Ike,” Crossman told AP with a laugh.