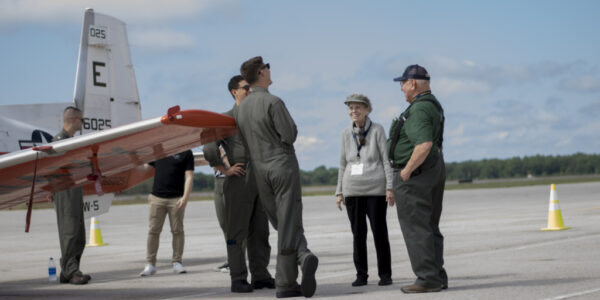 More than 700 retired aircrew members returned to the former Brunswick Naval Air Station, Maine over the weekend for a reunion, the Times Record reported. It was the 10th anniversary of the base’s closure. “[Y]ou don’t recognize everyone, but once you reconnect, it’s like no time has passed,” said Tom Donovan, who was based there in the 1980s….

Boeing is investing $200 million to start manufacturing the Navy’s latest unmanned aircraft at MidAmerica St. Louis Airport. It could add more than 150 jobs, according to AP….

Hundreds of volunteers joined businesses, the city of Colorado Springs and the local military community to help with needed renovations at a Gold Star mom’s home, Colorado’s Fox 21 reported. “They are really an amazing group of men, and they love their Gold Star moms,” Scotti Domeji said. “In many ways since I was a single mom, I finally found a community where I fit.”