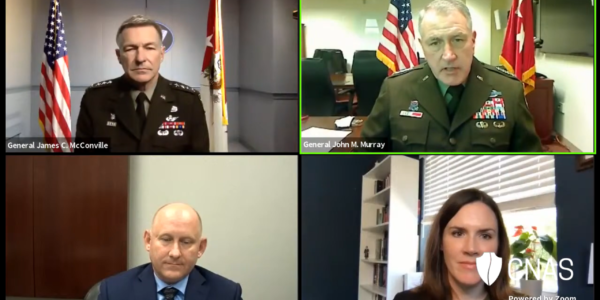 Army Chief of Staff Gen. James McConville remains “very, very concerned about the size of the Army,” he said Tuesday at a Center for a New American Security event. The current force is not enough to maintain readiness and continue the service’s modernization efforts, he said.

“What we’re trying to do is find and produce the best Army we can with the resources that we’re going to get.”

His concerns were echoed by Acting Army Secretary John Whitley and Gen. John Murray, the commanding general of Army futures.

The Army is expected to take a hit in the defense budget to be released next week.

None of them would talk specific budget numbers, but they did express concern that they are running out of excess spending that can be rerouted to modernization, as the service has done in recent years through its “night court” budget reviews.

“We’ve rebuilt readiness. We’re in a good state with readiness, but that is fragile, and it could be reversed,” Whitley said. “We’re in a good place moving on modernization, but that requires consistent, sustained funding to see through.”

Murray agreed, saying that “we are going to have to get this down to the ranks to solve this problem…. Talking about it today is helpful, but it’s not going to solve the problem. We’ve got to convince our people that it’s [about] dignity and respect.”