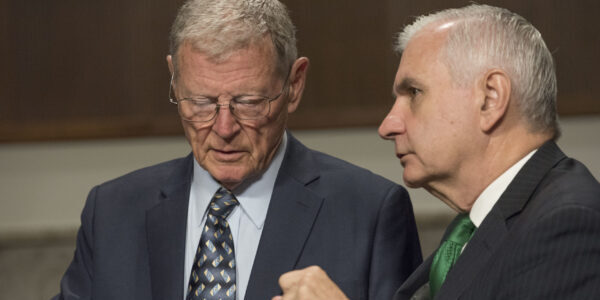 When it comes to defense spending, Sen. James Inhofe (R-Okla.), the top Republican on the Armed Services Committee, is on a mission to hold onto “a lot of the stuff that we gained during the Trump administration,” he said in a new Politico interview.

As the Biden administration talks of shifting focus from legacy defense systems to new technologies, Inhofe is concerned about losing ground to adversaries such as China and Russia.

“I just want to be sure that we have the defensive mechanisms, where we can shoot down anything coming in,” Inhofe said. “And, quite frankly, we’re not quite there yet. So, I think we need to have, as a target, to get where we are better equipped than our major adversaries.”

Inhofe also told Politico he has a positive working relationship with Sen. Jack Reed (D-R.I.), who won the committee chair gavel from Inhofe this year after Democrats took narrow control of the chamber.

“I was at his wedding and, I mean, we just go way, way back,” Inhofe said. “And I think the world of this guy.”