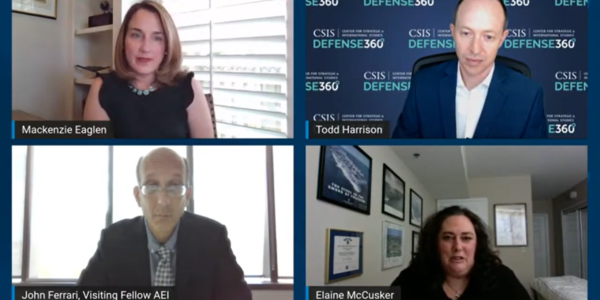 “Defense is not a Biden administration priority, and there is an attempt to redefine what constitutes a national security investment to divert defense funds to non-core activities,” said Elaine McCusker, a resident fellow at the American Enterprise Institute and a former deputy undersecretary of defense (comptroller) during the Trump administration.

McCusker made the remarks during a recent AEI discussion on the budget.

She pointed to references in the budget that national security expenditures include defending democracy throughout the world, advancing human rights, and fighting corruption and authoritarianism.

She also noted that about a third of the defense budget is related to personnel and quality of life, including “many costs that may be better aligned to domestic agencies.”

To make the most of its $715 billion budget, DOD has proposed cutting some legacy weapons systems, but Todd Harrison, director of defense budget analysis at the Center for Strategic and International Studies, said that may “just be a punt” and that senior leaders may back down.

“Congress is inherently going to be predisposed against a lot of these divestments,” Harrison said. “And it is just not clear that [Defense Secretary Lloyd Austin] himself is actually going to be personally invested in this and pushing it on the Hill.”

The administration may expect that these topline numbers won’t be final, said John Ferrari, an AEI visiting fellow.

“It looks like here that the Biden administration is under-requesting for the Defense Department, knowing that Congress will probably add back money as part of a deal to get the budget through, Ferrari said. And in many respects, they provided… the initial outlines of a roadmap for Congress to add about $20 billion to the defense budget.”

Democrats on the Hill have said they plan to design their budget resolution around the topline numbers provided.

The analysts said it is hard to determine President Biden’s future plans since the administration did not provide customary five-year projections.

“If I had to give this budget a grade, I would give it an ‘incomplete,’” Harrison said. “You can’t really see the direction, the vision of this budget. Where are they going? Why are they doing what they’re doing?”