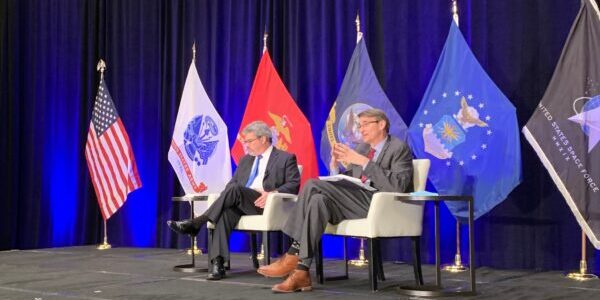 DOD will continue a community-first partnership approach to support housing, utilities, energy efficiency and other services, Paul Cramer told Installation Innovation Forum Tuesday. Cramer is performing the duties of deputy under secretary of defense for acquisition and sustainment.

Cramer noted the commitment among senior DOD leaders to focus on installation and community resilience.

“The climate is changing. We shouldn’t debate that,” he said. “The discussion should be about adaptability.”

An important part of DOD’s response is community cooperation, he said in an interview with John Conger, senior advisor at the Council on Strategic Risks and director emeritus of The Center for Climate & Security.

“It’s a partnership model and has been that way for a while. DCIP is an example,” Cramer said, referring to the grant-making Defense Community Infrastructure Program. “DCIP going forward will be about ensuring resilience off base.”

Cramer said DCIP is likely to expand in fiscal year 2023 but declined to talk about specific changes this early. He said DOD will continue to invest heavily in other installation-community resilience initiatives, too, such as its Readiness and Environmental Protection Integration program.

Cramer also said DOD has no interest in producing – and struggling to manage – its own energy on a large scale, instead relying on community and private sector partners.

“The days of going it ourselves are long in the rearview mirror.”