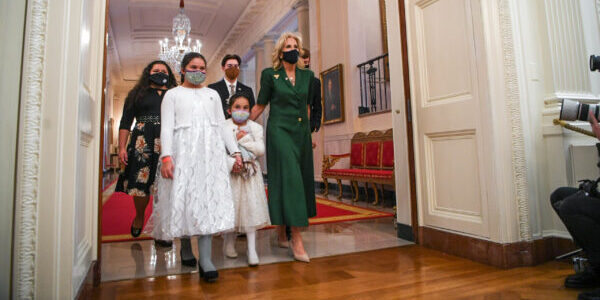 More than 50 advocacy groups are joining First Lady Jill Biden to extend support to the children of service members, veterans and caregivers. She announced the Hidden Helpers Coalition Wednesday at the White House as part of the Joining Forces initiative she started in 2013 as Second Lady and revived this year.

“We can’t shield our caregiver kids from the reality of war or its aftermath,” the First Lady said, as Military.com reported. “We can and we must give our military and veteran caregiving families everything they need to care for their wounded warrior with compassion, dignity and love.”

Dr. Biden was joined by the secretaries of Defense and Veterans Affairs, as well as former Senator Elizabeth Dole. A recent study from Dole’s foundation reported that about 2.3 million children in the U.S. live with a disabled veteran. Those kids are more likely to experience social isolation, learning difficulties, stress and fatigue, the study showed.

Nine-year-old Gabby Rodriguez said at the event that she struggled to connect with friends after her father, a Marine veteran, was hit by an IED, causing hearing loss, a traumatic brain injury and PTSD.

“I want every other caregiver kid out there to know that there are millions of us,” she said. “You are not alone.”

Defense Secretary Lloyd Austin also had a message for caregiver kids like Gabby.

“The grown-ups in the room today are going to be there to support you, because your love and your strength helps keep our country strong,” Austin said.