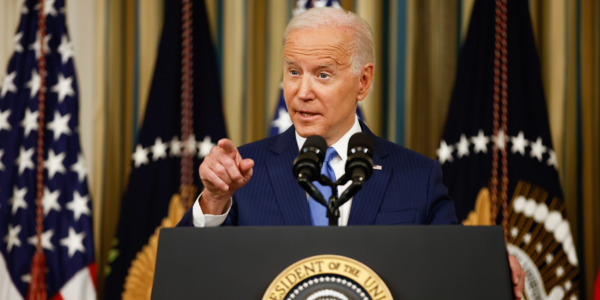 President Joe Biden said Wednesday the U.S. will continue sending aid to Ukraine as it fights off Russia’s invasion, no matter who controls Congress. Biden was asked at a press conference about past remarks by House Majority Leader Kevin McCarthy (R-Calif.), who may become speaker of a closely divided House, that a Republican Congress would not write a “blank check” to Ukraine without oversight.

“And, by the way, we’ve not given Ukraine a blank check,” Biden said. “There’s a lot of things that Ukraine wants [that] we didn’t do. For example, I was asked… whether… we’d provide American aircraft to guarantee the skies over Ukraine. I said, ‘No, we’re not going to do that. We’re not going to get into a third world war, taking on Russian aircraft and directly engage.’ But would we provide them with all — the rational ability to defend themselves? Yes.”

Biden said he will continue to request aid when needed and “would be surprised if Leader McCarthy even has a majority of his Republican colleagues who say they’re not going to fund the legitimate defensive needs of Ukraine.”