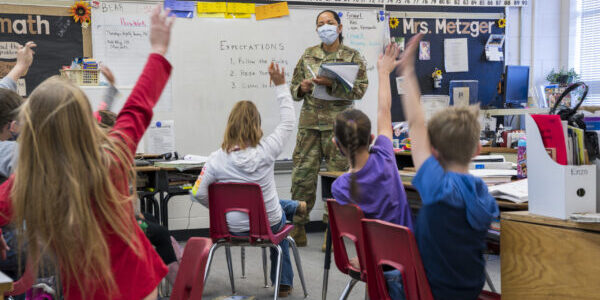 Across the country, many schools are turning to veterans, military spouses, Guard members and other military-connected people to help fill positions as teachers, administrators and school support staff. On Base had three questions for George Ann Rice, one of the executive directors of the public-private partnership Heroes to Education.

Rice will lead a panel discussion on the second day of Installation Innovation Forum, during a session called “Heroes to Educators: An Innovative Solution to the Public Education Crisis.”

ADC: How bad is the national school staffing shortage?

Rice: The 2022-2023 school year opened with thousands of classrooms being covered by substitutes, volunteers or other staff members as many teachers decided to retire early or leave the profession in frustration. Enrollments in colleges of education continue to decline as low salaries and a lack of respect from the public exacerbate this condition. This crisis is so serious that it has become a national security issue. It isn’t limited to the classroom alone. School nurses, speech pathologists, special education servers, office personnel, school counselors, school safety officers, bus drivers, IT support staff, a range of skilled trades and operations positions remain vacant.

ADC: What is Heroes to Education, and what’s its mission?

Rice: Heroes to Education is a public-private partnership providing for the staffing needs across the unfilled openings within America’s public schools. The prospective “heroes” include veterans, National Guard members, reservists, those preparing to leave the service within six months to two years and their spouses, as well as military spouses, first responders, retired law enforcement officials, and medical personnel. They bring the requisite skills, character and commitment to serving, mentoring and educating our young people as they look for a meaningful second career or additional work. Approximately 20% of people coming out of the military are from diverse cultures, with a majority being male. Many school districts find male teachers and role models the hardest candidates to recruit.

ADC: How are you reaching these goals?

Rice: We work with our partners at all levels of government, community-based agencies, military-connected groups, installation-level employment programs and others. Working with those groups, Heroes created outreach and awareness prototypes with platforms for recruitment and certification. School districts within three very different states—California, Florida and Nevada – have been exploring and working through numerous barriers to take part in Heroes to Education. But the work does not stop with making our heroes aware of opportunities in public education. The program will assist them in navigating the transition from the military environment to the public education environment, in attaining any certifications and licenses required for employment, in becoming employed in fulfilling positions, and in learning and growing while employed.